Hamipatralu Teachers Benefit from Date of Issue of Orders Memo 350684 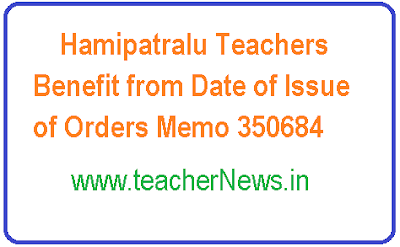 The attention of the Commissioner of School Education, A.P. Ibrahimpatnam is invited to the reference 2nd cited. She is informed that the clarification proposed in the reference 2nd cited is accepted except on points 2 and 3. On date of monetary benefit and mode of payment of arrears (points 2 and 3), it is clarified that the monetary benefit is allowed from the date of issue of orders keeping in view the financial implications involved and as such the issue of payment of arrears does not arise, in respect of teachers who were selected through DSC-2008 Notification and appointed after 01.07.2011 on Hamipatralu.

Download Hamipatralu Teachers Benefit from Date of Issue of Orders