The State Election Commission announced schedule on 08.01.2021 for conduct of ordinary elections to Gram Panchayats in the State. A copy of the election schedule is appended to this letter. The Model Code of Conduct for local body elections will come into force with effect from 29.01.2021 and it will remain in force till completion of all phases of Gram Panchayats elections” As per Para 3(A) of Model Code of Conduct, when the ordinary elections are notified to the Rural Local Bodies in the entire State, the lvlodel Code of Conduct is applicable to rural areas only and not applicable to the urban areas in the State.
The State Election Commission directs that there shall be a total ban on the transfers of all officers directly or indlrectly connected with the conduct of election – Grama Panchayats 2021 Elections. 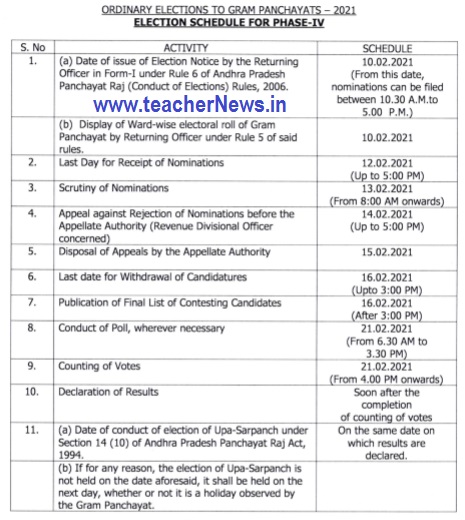 Downlaod of PO APO Duties Before and After Pollining Time 2021

These include but are not restricted to:

i) All the officers and staff of the State Election Commission.
ii) All the offlcers and staff members working in the offlce of the Commissioner of Panchayat Raj.
iii) Collectors & District Election Authorities. Joint Collectors, Revenue Divisional Officers, Sub-Collectors and Tahsildars.
iv) Returning Officers, Assistant Returning Offlcers and all polling personnel and other officers of Government and local bodies deployed for conduct of elections to Gram Panchayats.
v) Offlcers of the Police Department connected with the management of elections, namely IGs, DIGS, Commissioners of Police, Superintendents of Police, Additional Superintendents of Police, Sub-Dlvlsional Police Officers, Circle Inspectors, Sub-Inspectors and other Police officers.
vi) The transfer orders issued in respect of the above categories of officers prior to the date of announcement of schedule but not implemented till date should not given effect to without obtaining specific permission from the State Election Commission in this regard.
vii) This ban shall be effective till the completion of election process. The Commission further directs that the State Government should refrain from making transfers of senior officers who have a role in the management of Gram Panchayat elections.
viil) In cases where transfer of an officer is necessary on account of administrative exigencies, the State Government may with full justification approach the State Election Commission for prior clearance.
AP Gram Panchayat Elections Schdeule Downlaod