It was also clarified therein that the incumbent can split the CPS(NPS) amount in 80CCD(1) and 80CCD(1B) if the employee have less than Rs.1,50,000/- savings in 80C and exceeds RS. 50,000/- towards CPS(NPS). They are therefore requested to follow the above instructions for strict compliance Clarifications for CPS Employees on 80CCD(IB) Deductions for CPS (NPS). 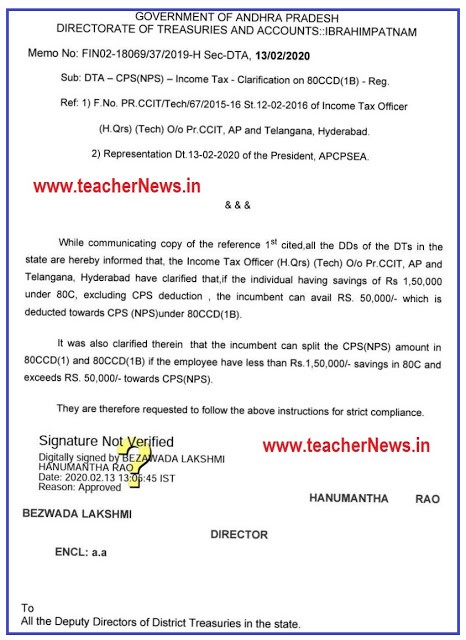 How to benefit 80CCD(1B) for CPS Employees

The deduction is restricted to a maximum of 10% of salary for salaried employees and 10% of gross income for self-employed taxpayers, i.e. taxpayers who are not salaried employees. Here, salary refers to the total of basic pay and dearness allowance.

Is NPS deduction over and above 80c?

50,000 in NPS (Tier I account) is available exclusively to NPS subscribers under subsection 80CCD (1B). This is over and above the deduction of Rs. 1.5 lakh available under section 80C of Income Tax Act.

How do I claim deduction under section 80ccd 1b?

How do I claim my NPS deduction?

There is a deduction of up to Rs. 1.5 lakhs to be claimed for NPS – for your contribution as well as for the contribution of the employer. – 80CCD(1) covers the self-contribution, which is a part of Section 80C. The maximum deduction one can claim under 80CCD(1) is 10% of the salary, but no more than the said limit.

Also, from FY 2015-16, you can invest an additional amount of Rs. 50,000 (or more) to your NPS Tier I account and claim tax deduction on the same, subject to a maximum of Rs. 50,000. You may note that NPS is now the only investment vehicle which allows you this additional tax deduction under section 80 CCD (1B).

Unlike the Tier 1 NPS Account, Tier 2 NPS Account does not qualify for tax rebate under section 80C of the Income Tax Act. This is because NPS Tier 2 Account does not have a locking period for funds which Tier 1 Account has. However, withdrawals are taxed according to the time at which withdrawal is made.

Can I claim deduction on both my own and my employer’s contribution?

What all comes under 80ccd?