Skip to content
Aadabiddaku Rakshaga Kaduludam Rally  – Slogans and Pledge on 7th May, 2018 : ఆడ బిడ్డ కు రక్ష ర్యాలీ లో నినాదాలు- ప్రతిజ్ఞ. తేది 07.05.2018. Aadabiddak Rakshaga Kaduludam Rally on 7th May 2018 in all District. The recent incidents of sex crimes such as the one reported in Dachepalli, Guntur of the 9 year old child are a serious threat to the well-being of any society. Government of Andhra Pradesh have “Zero Tolerance” to all sex crimes against Women and Children and are deeply anguished to note such incidents. The Government also recognize the fact that in the absence of community awakening and community action, no lasting change is possible. In order to tackle this menace Government have decided to launch a multi – sectoral drive to empower women and children through spreading awareness as well as by taking action by various Departments and stakeholders. It is also decided that in order to express the deep- felt commitment and strong resolution of the State and the society to end sex crimes, the Government of Andhra Pradesh give a clarion call to all sections of the society to join in a State-wide movement to end sex crimes against women and children. 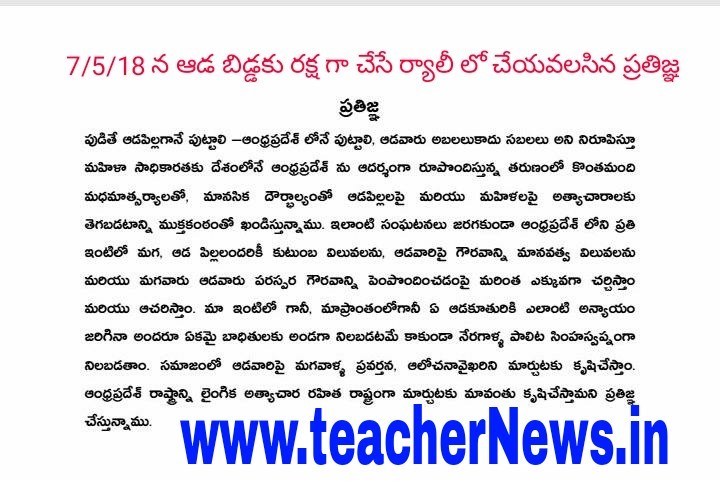 Role of Sadhikara Mitras and Public :